One day in Kobe, Japan: things to do 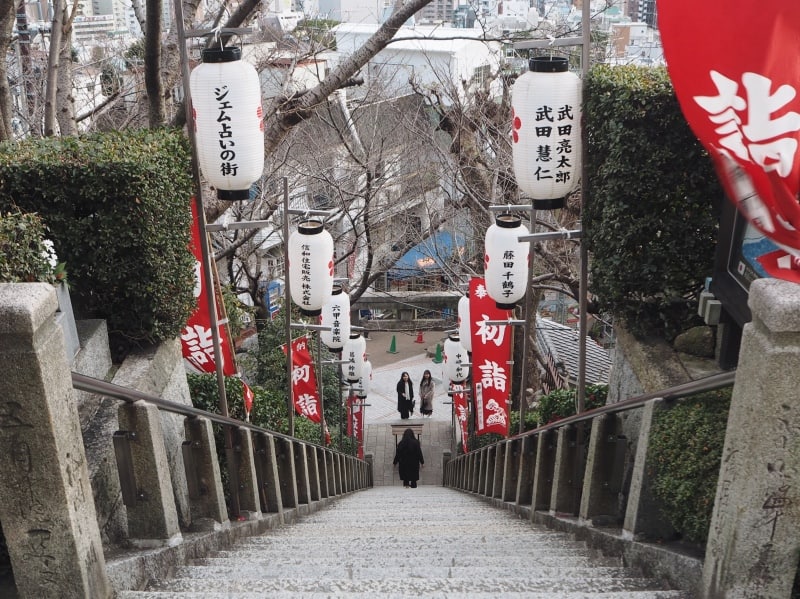 Pack The Suitcases uses affiliate links. If you make a purchase through these links, I earn a commission at no extra cost to you. Thanks!

One day in Kobe, Japan is not enough to view everything this floral, coastal and mountainous city has to offer.

Although I only had one full day in the city of Kobe, I also had evenings there after doing some day trips and managed to get quite a good feel for the place. Kobe stretches along the coast, sandwiched between the sea and the mountains. The heart of the city is Sannomiya, where the big shopping area is, along with the main flower and gardens area. It may seem daft that I went to Kobe in January: winter probably isn’t the best season for going to a city of flowers! But this is Japan and they’ve thought of everything. The flowers all over the city were very much up to scratch.

Please note that this post is from 2017 and needs deleting and rewriting as it’s from before I knew how to blog/write. I’m in the process of rewriting and republishing all my older posts for 2022. Watch this space!

Spending one day in Kobe: a perfect itinerary

Your first port of call should be the Kobe Nunobiki Herb Gardens and Ropeway. This involves getting what I’ve decided is officially the best form of transport: a cable car.

The entrance to the cable car is by Shin-Kobe Station, at the foot of the Rokko mountain range. As it ascends up the hillside, you get beautiful views across the city, port and sea. It’s reminiscent of the cable car in Funchal, Madeira which is one of my favourite things in the world. Only on a much bigger scale, obviously. This is Japan, after all. They don’t do things by halves.

Get your fill of flowers at the Kobe Nunobiki herb gardens

The cable car drops you at the top, where there’s a café and a giant wedding cake on display. Obviously.

Head down the hill towards the glasshouse, through the herb gardens. Inside the glasshouse, it’s obviously hot all year round so you’ll likely find everything in bloom no matter when you visit. I was there in February and they’d put a special Valentine’s display on. Hearts and flowers everywhere. You can just tell that the gardeners here go 100% all out for any and every seasonal occasion.

There are also little stands all round the herb gardens for you to rest your camera or phone on to take a photo on self-timer mode. Genius.

Walk back down the mountain via waterfalls

Venturing out of the warmth of the glasshouse, walk down the mountainside with the cable cars overhead, following the marked trail.

You’ll see the Nunobiki waterfall and a large reservoir.

Explore the Kitano area: a mini Europe in Japan

After the mountainous stroll, head into town.

Kobe was once Japan’s only port for foreigners to enter the country. So lots of merchants and diplomats lived there and built Western-style houses and other buildings.

Obviously, these are much more interesting and a novelty to Japanese tourists than to us as Europeans, because they just look normal to us. It’s still quite fun and surreal seeing all these ‘normal’ buildings in Japan, where buildings usually look decidedly different to home.

Visit the shrine at the top of Kitano

Kitano sprawls up the (steep) hillside, leading to a rather nice shrine featuring a statue of a bull and a good view.

Kobe is famous for beef, so we can assume the original bull met an untimely end as a steak, but at least he got to wear a novelty red bow tie.

Apologies for the hunger-inducing photograph.

Explore the streets of Kobe and do a bit of shopping

Kobe is excellent for shopping, with miles of covered malls and underground shopping centres that go on forever.

But you don’t need to go into shops to appreciate it all. Just walking around Kobe, like anywhere in Japan, is entertainment in itself. There’s more detail on this in my post about Japan in general and how pleasantly baffling it is, but hopefully the first photo below gives a sense of what I enjoy about it.

Everything is going on, all the time, all at once. Everywhere you turn, there are more noises, more people, more stuff. It never ends. You look down a bustling side street, with people spilling out of shops and cafés as far as the eye can see, and then you remember to look up and realise there are about 10 floors of the same thing going on above you. And quite possibly also below you, in several layers of underground malls.

In true Japanese fashion, Flower Road does what it says on the tin. It’s a main road near Sannomiya Station known for its year-round displays of beautiful flowers.

Every display has had a ridiculous amount of care and attention poured into it. In January, there are fake picture frames filled with flowers, ornamental cabbages arranged in the shape of hearts and clocks, and huge borders of flowers running alongside the road. Fountains and sculptures break up the array of colour.

I was very impressed with how vibrant and healthy all the plants were. By the time we hit January in the UK, everyone’s ornamental cabbages have rotted and it’s all looking thoroughly miserable. But in Kobe, it was all perfect. The gentler climate must help, but it’s just typical of Japan that it all looks so pristine.

Kobe’s Chinatown is a big deal. Apparently, it’s one of only three Chinatowns in the whole of Japan. It’s also quite small, much smaller than the Chinatowns near where I live (Liverpool and Manchester, UK). But it’s worth a look. It’s just near Motomachi Station.

It’s nice to wander through it in the day, but it really comes into its own at night, with the classic Chinese lanterns glowing overhead. A lot of it is just shops selling tourist stuff (fridge magnets and other trinkets) but there are food stalls and restaurants too.

See the view from Kobe port at night

This seems to be the standard postcard scene for Kobe. It’s very pretty lit up at night.

There’s a huge shopping centre there called Harborland, which goes on forever, and also loads of restaurants. But when I visited, it all felt a bit tacky and was full of Chinese tourists rather than locals. Despite that, it’s well worth a walk down at night just to look at the view though.

And if you go around Christmas time, you might catch this amazing but bizarre Christmas tree display full of lampshades.

Eat Nabe (hotpot) if you’re there in cold weather

In a trendy area by Sannomiya Station, you’ll find this very busy place called RibLab Kitchen. I recommend their nabe (a Japanese hotpot) with some fries on the side. Highly welcome if you’re not after a big old slab of Kobe beef one night.

How to get there

Kobe is on the Sanyo shinkansen line. It’s well connected to Tokyo, Osaka and Kyoto. It also has its own airport.

I would go for the Centurion Hotel Grand Kobe Station, a fairly new mid-range hotel near Kobe Station – the old station, not the shinkansen one. It was the best hotel I have ever stayed in in Japan.

Those of you who have been to Japan will probably know that mid-range hotels are very hit and miss. They often stink of cigarettes even when they give you an alleged ‘smoke-free’ room and they often only have a ‘small double’ bed and not much space within the room to lug your suitcase round. Ryokans (traditional Japanese inns) are more popular than mid-range Western style hotels, so that’s where the quality tends to be.

But in this hotel, the room smelled fresh and clean, had lovely big beds, was normal European-size, and had a shower worth texting your mum about. And it was only about £50 a night.

How to get around

The city centre is walkable but there are also JR and private line trains, the subway and a monorail. Not to mention the cable car up the mountainside…

As proven by going in winter, Kobe has a display of flower power in every season. Even in monsoon season, you’d be fine for stuff to do because it is full of covered malls and underground shopping centres/restaurants.

If you found this blog post on what I did over one day in Kobe useful, why not pin to your Pinterest board?

And if you enjoy my blog, you can also buy me a drink. Cheers.

21 of the best winter sun destinations to escape the cold 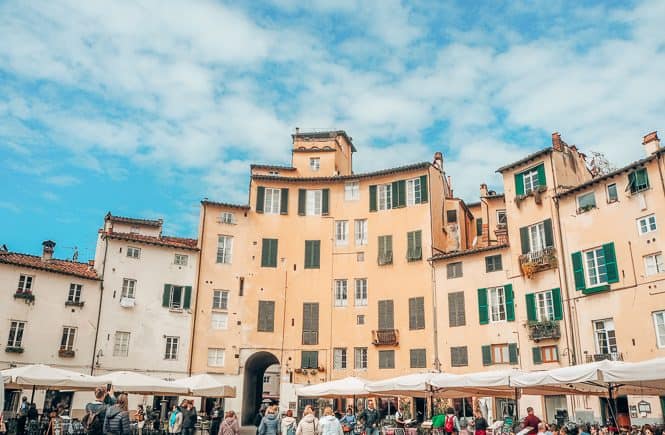 23 things to do in Lucca, Italy: discovering Tuscany’s walled city 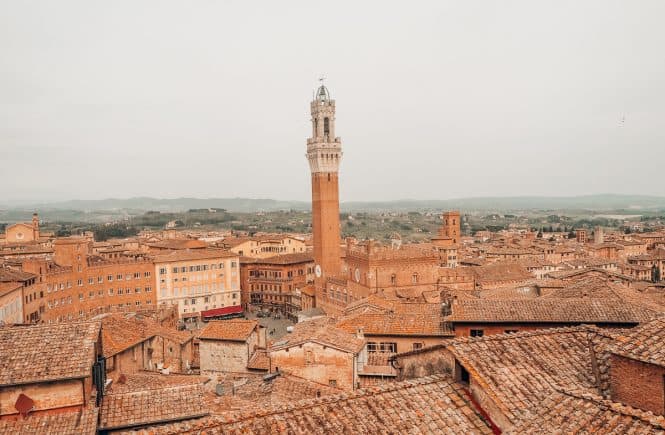 How to do a Siena day trip from Florence, Italy: a perfect one-day itinerary

This site uses Akismet to reduce spam. Learn how your comment data is processed.

WELCOME TO PACK THE SUITCASES